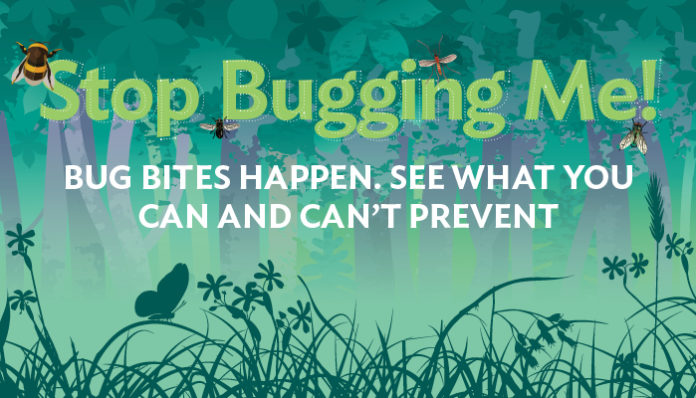 This summer more of us are spending time outdoors either hiking, biking, camping or playing in the water. It’s a great time of year to take advantage of the great weather and outdoor fun. Unfortunately, it also happens to be the time of year that insects like mosquitos, ticks, spiders, bees and gnats are out and about.

As soon as the weather starts to bloom with Spring, typically around May, these pesty creatures are out on the prowl for their next victim. In an article published in the National Center for Biotechnology, their team found that from 2001 to 2010, for people that visited emergency departments for non-canine bite and sting injures, insects accounted for 67.5% of bite and sting injuries, followed by 20.8% of arachnids. They also noted that the number of bedbug bite injuries increased more than 7-fold from 2007-2010. Yikes!

Why do insects bite or sting?

It’s not in your head. Mosquitos and other insects really do prefer some people to others. Insects like mosquitos are particularly drawn to certain chemicals, like lactic acid, in our skin. And some people simply produce more of those chemicals than others. There’s no getting away from it. Genetics determines your chemical makeup and can either work for you by creating less of the attracting chemicals, or against you by making you the object of skin-biting, blood-sucking affection.

Your blood type can certainly be a key factor in the amount of mosquito bites you receive. It was found that in a study with a controlled setting that type O blood attracted mosquitos nearly double the amount of times of those with blood type A. People with type B were somewhere in the middle… B=average, go figure.

Another important factor in being a target of mosquitos is your metabolic rate or the amount of CO2 (carbon dioxide) your body releases when burning energy. The higher your resting metabolic rate, the more attractive you are to mosquitos and other insects like gnats.

Also, if you’re pretty active outside, they can definitely pick you out. So be prepared to be a target the more you’re active outside. Or if your resting metabolic rate is high. Wait, there’s no winning here, is there?

Spiders, on the other hand, tend to bite as more as a defense mechanism. If a spider finds itself in a situation where it feels trapped or you unintentionally come into contact with a spider, they you might get bitten. Spiders tend to avoid people. Unlike the mosquito and gnats, they are not drawn to human chemicals and don’t feed on humans.

Fear not, if you do get bitten by a spider, there are only about a dozen of the ~40,000 species in the world that would cause serious harm. Most bites that people attribute to spider bites are not actually spider bites. They’re more likely attributed to bites or stings from other insects such as fleas or are skin reactions to chemicals or infections says arachnologist Chris Buddle – McGill University in Montreal, Canada.

Bees tend to sting because they feel threatened (much like a spider), if they are confused or if you step on them not even realizing it. A bee stinger is their protective weapon, and not all bees have one. For those that do, it is located on their abdomen and they typically use it to defend themselves or their hive.

If you get bit or stung and feel like you need medical advice, remember HealthiestYou!

Tips to remove the target on your back

Did you know that dark clothing attracts mosquitos more than lighter colored outfits? Because mosquitos tend to fly closer to the ground, when they’re looking for their host, they are looking up and toward the horizon. When you’re wearing dark clothes, they can see you much easier than if you were wearing lighter apparel that blends in better with the horizon. So put on some lighter colored clothing when you’re outdoors.

If you’re worried about spiders, simply be aware of your surroundings. Spiders can hide in shoes, gardening gloves, dark corners… anywhere where they think they’re out of the way. And if you surprise them, you could find yourself the victim of an unintentional bite.

Because we can’t truly prevent all bites or stings, you should be aware of some advised treatment of basic bites and stings. According to WebMD, some first-aid for insect bites can include the following: